As requested I have made an image of the decks used by my opponent and me for the round. 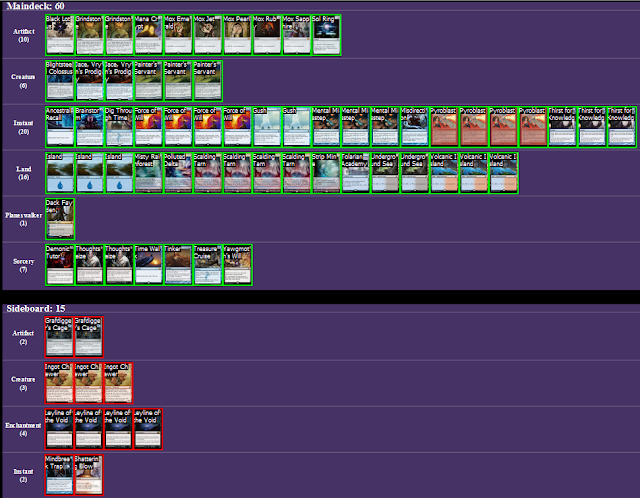 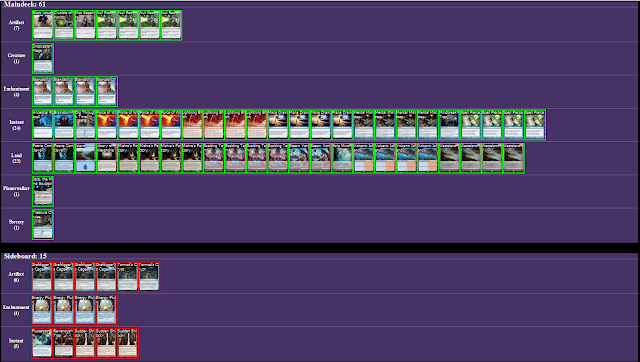 Having just lost my first Round to Will Wong I was earnestly seeking a win. Standing in my way was another Brisbanite in the form of David Brotchie. David is famous for playing Landstill in every tournament he is able to. He has been successfully piloting this archetype for as long as I have known him; top 8’ing multiple events including the previous Melbourne GP where he defeated me in the final round in our “win and in”. He has been active on the TMD thread for the deck and is a very respectable player. There was no doubt in my mind that he would be on anything other than Landstill, the only question was which splash he had opted to make. I did ask him before our match but he was not forthcoming with the information.  As I settled in for the match I knew that this would be a tough fight.

As it happened, our first game was an incredibly long affair; taking up nearly 25 minutes of our precious 50 minutes. David unfortunately took a mulligan down to six cards and he was on the play which meant he could not get to his scry card until his second turn. The game started as you would expect with the only relevant fight early was his Lightning bolt on my Painter’s Servant eating a Mental Misstep. Despite me playing a Grindstone, he was able to land a Null Rod effectively shutting down my ability to combo out.

I had no solution in hand to the Null Rod and had to start pressuring his life total with my singleton Painters Servant. Before I had found the Pyroblast for the Null Rod he had found a second Rod and had started swinging back with the Faerie Conclave he had in play. Knowing that I had to keep David on his back foot I broke a Standstill immediately hoping that I would be able take advantage of the mana he had tapped down during his main phase.  Despite this influx of cards, David was not able to remove my Painter’s Servant. A crucial point at this point had me exile a Yawgmoth’s Will to a Force of Will just to stay in the game.

At only 5 life, after having done the math on the situation and seeing that David’s Faerie Conclave would win the damage race by a single turn I gave up hope of finding the right answers to the pair of Null Rods and turned my second Pyroblast to the Faerie Conclave to give me some time. This was where things started to go south for me.

David resolved a mid-counter war Ancestral Recall and followed it up with Crucible of Worlds, starting to squeeze my mana base by recurring Wasteland. I had not fetched my basics early (to keep up Pyroblast) so I had some time but before long I was down to only a single Island. All this time however I had been steadily beating him down, one damage at a time, with my Painters Servant. On only three life, David managed to land a Jace, the Mind Sculptor and a Standstill after bouncing my beater. I was forced to break the Standstill to replay the Painter and we David used the turn of summoning sickness to Brainstorm with Jace.

Thinking I was dead in the water I attacked around the Jace putting him to two. We spent a few turns between with a common theme of me playing the Painter and David bouncing it before Jace was at a single loyalty and David elected to Brainstorm which found the strip mine putting my mana at only a single land. I attacked David down to a single life point and with my final top deck, a fetchland putting me to only two life, cast my second Painter’s Servant.

David drew the card for turn, checked his options and with a second Brainstorm effect he extended his hand.

I was shocked, I thought there was no way that I had actually beat him from 19-0 (including Forces and Fetches). Even when packing up the cards I had to verbally ask him to ensure that I had indeed won the game. I was spent and perhaps he had found the Lightning Bolt for me, I was genuinely so surprised that I had managed to put out from under two Standstills, an Ancestral and a Jace that I had to shake my head a few times.

Trying to get over the shock of having won such a hard fought game one and preparing for game two I made the following changes to my deck:

A similar side board plan as the previous round with only the Mountain acting as a replacement for the Shattering Blow.

Game two did not follow a similar path to our first game.

After we both kept our seven cards I had Duressed his Force of Will and drawn 6 extra cards before he had played his third land thanks to an Ancestral and a Thirst for Knowledge on my first and second turns. I leveraged this advantage into a Tinker for Blightsteel Colossus on my third turn and despite David putting up some resistance in the form of a blocker to only put him at 8 poison counters he conceded shortly after. He did manage to counter two of my spells but I just had so many more cards at my disposal before he had his late game engines online that I was unlikely to lose from after the first turn or so.

Overall David played spectacularly and I thoroughly enjoyed our match. Our first game went for such a long time it was a pity that our second was so short. Now I had had my revenge from GP Melbourne 2013; I was at peace and ready to stomp into round 3.
Posted by shrew at 22:30