When we last left our intrepid hero he was 1-1 going into round three after a killer second round which included a 25 minute game one. Having picked up a round I was ready to go and feeling over the moon. My next opponent would be Jeremy Kajfes. I had run into Jeremy a few times in the past but did not have him pinned down on any particular deck. Going into the round I had no idea I was playing against the bogeyman of Vintage; Dredge. I have done poorly against Dredge in past tournaments. Whilst I have been generally fortunate in testing with most of my decks I have lost at least one round to the deck in nearly all of my major tournaments. 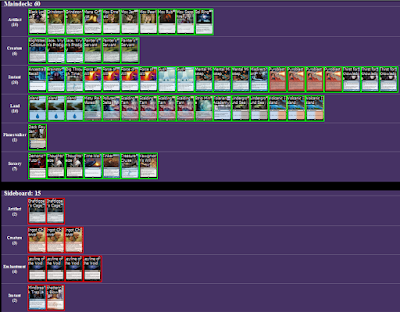 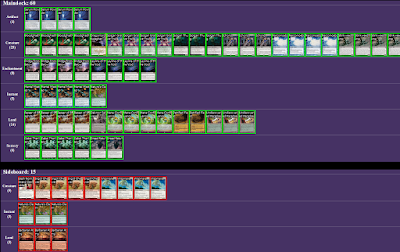 All was revealed when on the play Jeremy announced a Serum Powder and I took a quick check of my hand which included a Painters Servant, a Grindstone, and two lands. I saw my opportunity to possibly steal a game if I could draw some acceleration or perhaps he had a slow draw.  I felt that my deck was quite weak to dredge (even more than blue decks in general) due to the lack of Vampiric Tutor and to a lesser extent Mystical Tutor. This would mean that unless I drew Tinker or Demonic Tutor in my opening hand, my main combo would have to do.

Luckily for me he did indeed have a slow draw. He found the Bazaar in his opening hand but did not have any dredgers. I did play a turn one Grindstone and a turn two Painters Servant. On his third turn after once again failing to find any card with the word Dredge on it he managed to Nature’s Claim the Grindstone. Lo and behold my next draw was the land I would have needed to combo out but alas I had no Grindstone. Instead I followed this up with hitting his Bazaar with a Pyroblast with the help of my Painter’s Servant which meant that Jeremy was in top deck mode.

Jeremy did find the dredger the next turn and I also drew my second copy of the Grindstone and he was not able to deal the 13 points of damage required to kill me and I simply milled his entire library the following turn which was enough to earn me the concession.

This game I had been incredibly lucky. I was lucky that my seven included a combo kill, lucky that my opponent stumbled on finding a dredger, and lucky that I drew the only other copy of my Grindstone the turn after one was destroyed. I had fully expected to lose this game, as one often does game 1 against dredge, and hurriedly began to sideboard.

My sideboard going into game 2 was:

This was a pretty self explanatory sideboard. I had chosen Leylines and Grafdigger’s cage to be my general Dredge answers as I was running a full complement of Forces, Missteps and a Misdirection which gave me great hope at being able to fight off Jeremy’s anti-hate cards. I had originally had Yixlid Jailers in place of the Cages but felt that my Oath matchup needed some work so I took the overall weaker Grafdigger’s Cage rather than the stronger Jailer to the event.

Game two was an interesting game in which the balance of power seemed to tip back and forth between Jeremy and me, always teetering on the edge of the precipice which would end the game in our favour.

Once again both Jeremy and I kept our sevens and I opened with the Leyline. I had an early line to Tinker which I took but Jeremy was able to remove my Leyline with a second removal spell after I had countered the first. I Strip Mined his first Bazaar of Baghdad but he had a second.  I still had a Grafdigger’s Cage in play but with no more permission to stop a potential Ingot Chewer or Nature’s Claim. Jeremy put some dredgers in his yard and removed my Cage with a Nature’s Claim spell. Feeling flustered I cast a Yawgmoth’s Will just to get back the Strip Mine and cast a Tinker (sacrificing my Painter’s Servant) to put Blightsteel Colossus into play. I was feeling good that I had removed two Bazaars and he that had only a single draw step to find something relevant against my Bightsteel.

It was not to be my game however as Jeremy played Bazaar of Baghdad #3 the following turn and summoned enough creatures to make my Blightseel irrelevant to the outcome of the game. He did block with only a single creature which put him to 9 poison counters but his last turn just exploded with an army of hasty 2/2s killing me in short order.

I chose not to change the sideboard as I felt that I did not see any new or interesting features that would warrant the return of a Thoughtseize etc.

Game 3 I opened with the following cards after my mulligan.

On the play I saw that I would be able to have a Leyline in play and would be able to protect it so I kept. Jeremy exiled 20 cards or so finding a suitable hand. Within these 20 cards he exiled a number of important cards including multiple dredgers, two Bridge from Below, two Cabal Therapies, and a Narcomoeba. I played the Leyline and waited on casting the Ancestral Recall until after he played Bazaar of Baghdad for turn. Jeremy unfortunately was very light on answers for my Leyline as he dug deep through his deck to find additional answers after I had cast Force of Will of the first. A second Leyline came down on turn 4 but by turn 6 they had both been destroyed.

A freshly drawn Yawgmoth’s Will put one of the Leylines back into play and Jeremy was once again forced to exile multiple cards to dig through his library with Bazaar  to find an answer. I was low on threats myself and was not able to stop a Wispmare but having destroyed his only Bazaar just a turn earlier meant that once again he was drawing off the top rather than dredging. Jeremy did find another bazaar but had only a single activation before I was able to tutor for and play my fourth Leyline for the game. Leyline of the Void #5 quickly showed up and from there it was a simple matter of finding the Tinker before my opponent extended his hand in defeat.

It was a rough game 3 for Jeremy, having had to exile so many important cards early, and then having to exile even more must have hurt. Not to mention having your opponent play 5 Leyline of the Void (4 of which were hard cast) in a single game. I got lucky but I was able to beat my curse and was happy to move into round 4 with only a single loss.
Posted by shrew at 21:58